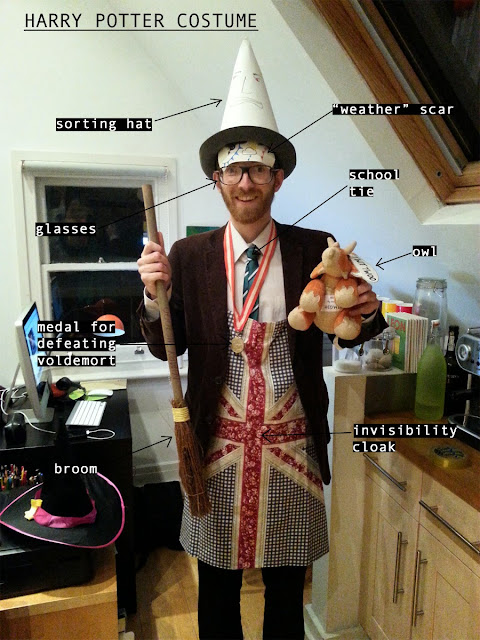 Yesterday morning I received a text message "reminding" me that my friend Richard's birthday party that evening was fancy dress.  But it was the first I heard of it!  So I put my thinking cap (or sorting hat!) on, and thought what I could rustle up at short notice.  People always comment on my resemblance to a certain boy wizard (and Harry Potter is that boy wizard), so my decision was easy enough!

Now all I needed was the ingredients!

But what is Harry Potter known for?  Some things sprang to mind easily, some took a little longer, but pretty soon I had a definitive list of necessaries:

- large plastic-framed spectacles
- the metereological scar on his forehead
- a school tie
- his pet owl Hagrid
- a hat with a face on it
- an invisibility cloak
- a NIMBY HS2000 flying brush
- the medal he was awarded by Princess Leia at the end of Prisoner of Alcatraz when he destroyed the Ring of Power and defeated Lord Vorderman.

I couldn't wait to get stuck in!  First I went to Lord Sainsbury's local outlet to see if he could help.  He wasn't in, but I had a quick browse and pretty soon found a brush that would suit my needs.  It was quite old-fashioned, which is why I think it was going for so cheap, so I got myself a real bargain!  I already had marker pens at home, so adding the branding would be easy.

One down, seven to go!

Now, I knew that one of the hardest things to make or acquire would be the owl, Hadron, so I concentrated on that next.  Unfortunately, the animal figurine aisle wasn't very well stocked with birds, but they did have a good selection of dinosaurs.  But as a scientist, I know that dinosaurs evolved into birds, so I figured that would probably be the best that I could do in such a small timeframe.  A speech bubble and a name tag would surely clear up any resulting confusion!

So that was at least two things sorted.  I went through the mental checklist, ticking off those things I already had at home.  Luckily for me, I'm normally a glasses wearer, I own a stripy school-like tie, my cooking apron would make a great invisibility cloak, and only a few months ago I won a medal for some ten-pin bowling I did.

That was now six things!  All I had left to sort out was the scar and the hat, both easily sorted out with some thick card and marker pens (and some elastic bands and a stapler too, of course!).

And Hey! Presto!  I was ready for a big night out. 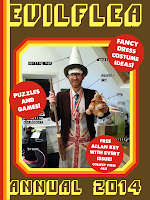 If you'd like any more details about how to make the costume, or how to adapt it for Roy or Henrietty, it will all be included in my 2014 annual, coming out later this month!

All 746 pages will be packed with the usual puzzles and games, advice columns and of course the evilflea™ free collectibles™!


Link of the Day: Your Beautiful Eyes

Email ThisBlogThis!Share to TwitterShare to FacebookShare to Pinterest
From the Series: Completely Random