Very Short Mondays: The Girl In The Tin Foil Wrapper

"Why don't you just put a jumper on?" said The Man With Three Scarves.

"But you're not a marathon runner."

The Girl In The Tin Foil Wrapper said nothing.  It was true.  She wasn't a marathon runner.  But she had been, once.  At the finish line a man gave her the tin foil wrapper she was wearing now.

Though today it was a bit torn in places.

Maybe she should run another marathon.  She made a mental note to google it later.  See what came up.

Link of the Day: Good News!

Email ThisBlogThis!Share to TwitterShare to FacebookShare to Pinterest
From the Series: Prose, Very Short Stories, Writing 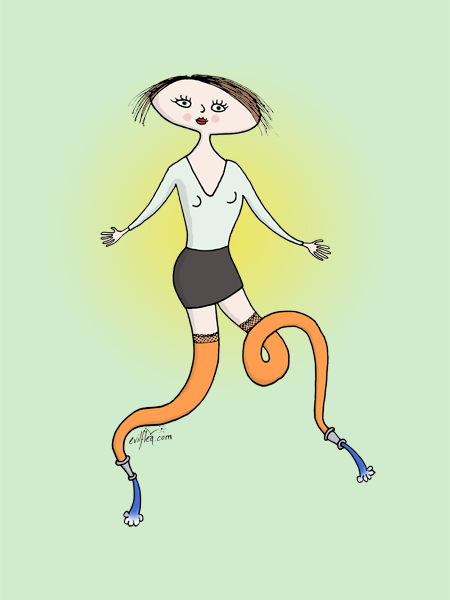 A new silly doodle.  When I thought of this idea initially, the brilliant Marc Johns came to mind, so its style is a little influenced by his.

You can buy 'Hosiery' greetings cards, prints, mugs, t-shirts etc on both my Redbubble and Spreadshirt shops.

Link of the Day: Realistic Mario

Very Short Mondays: The Man With Leaves On His Face

George shaved once, every year, towards the end of autumn, to remove the twiggy remains of his most unusual beard.

He didn't use any of the usual brands of razor, and instead carefully and expertly pruned his face with a pair of garden shears that had caused not a small number of nasty accidents in his younger days.

George had honed his technique since then, however, and now didn't even require the use of a mirror.

It was only now, as the Christmas season approached, that he would visit his family and friends, and allow photographs of himself to be taken.

He felt new.  Refreshed.  Ready to face the world.

Link of the Day: Some Things

Email ThisBlogThis!Share to TwitterShare to FacebookShare to Pinterest
From the Series: Prose, Very Short Stories, Writing
Newer Posts Older Posts Home
Subscribe to: Posts (Atom)
evilflea is a collection of doodles, stories and poems created by [name redacted] when he really ought to have more important things to do.